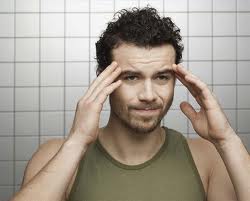 It was not until Richard Anderson sat down at Perkins for pie and coffee that he noticed he was bleeding and had shards of glass in his ear.

Eight months ago today, a car accident in south Fargo changed everything the 46-year-old Moorhead man knew about himself. “I’m still trying to figure out who I am,” he says.

After his vehicle was hit in the passenger side by a woman going about 40 miles an hour, Anderson did not do any of the things he normally would have. He did not  get the name of the driver, they did not exchange information, and he gave the police officer the wrong insurance card.

Thinking he was fine, Anderson declined medical attention and walked across the street to the restaurant to wait for his wife to pick him up. He was seen at a walk-in clinic but sent home. Two days later, his wife insisted he go to the emergency room.

Although his CT scan was clear, Anderson suffered a concussion, or in medical terms, mild traumatic brain injury. The effects, however, have been anything but mild.

In the following days, weeks and months, Anderson’s wife noticed something was different. “Luckily, I had a caretaker that was able to provide for my needs,” Anderson says. “I don’t think I’m exaggerating when I say if I hadn’t, I might’ve been out on the street by now.”

Anderson and his wife had planned a Hawaiian vacation long before his accident. Though he was nervous, he was looking forward to it, especially enjoying a romantic dinner with his spouse.
“What I hadn’t anticipated were flickering Tiki lights at every table, Hawaiian cowboys playing ukuleles, and expensive food that I could not taste,” he says.

The mental overload was too much for Anderson. After nearly causing a car accident, Anderson handed the keys to his wife. But even riding in a vehicle as a passenger is difficult. “Everybody seems to be going 90 miles an hour,” Anderson says.

Concussion symptoms can include increased sensitivity to sounds, lights or distractions and loss of sense of taste or smell.

Most people don’t experience long-term problems after a concussion, but according to the Brain Injury Association of America, up to 15 percent have persistent, disabling symptoms.

Post-concussive syndrome, the set of symptoms that emerge after a concussion, often goes undiagnosed or misdiagnosed.  The connection isn’t always made to the injury.

Posted by Unknown at 1:28 PM No comments: 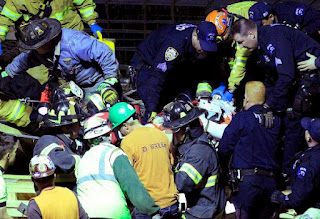 New York — Authorities are reporting that two large pieces of a 170-foot crane came crashing down at a Manhattan construction site Tuesday, killing one worker and injuring four others.
The New York Daily News said one section was 80 feet long and the other was 40 feet long.
“It came down like a dinosaur,” said a worker from the construction site who was waiting at Bellevue Hospital Center, where at least one victim was being treated.
CNN writes the accident occurred just before 7:30 p.m. at an MTA train extension project work site at West 34th Street and 11th Avenue.
“It started to vibrate — you just see the metals snap one by one. It shook the whole area,” David Tobin, 15, who witnessed the collapse as he walked by with his friends, explained. “It started to fall down. It was crazy. The metals just snapped.
“People started to run away. Some people were facing back [and] a few of them got clipped.”
The man who died, identified as 29-year-old Michael Simmermeyer, was pulled from the pit that sits 60 feet below street level at W. 34th St. and 11th Ave., the FDNY said. He went into cardiac arrest on the way to Bellevue Hospital where he died.
While the cause of the tragic crane collapse is not yet known authorities are investigating an issue with the rear of the machine. Fire Chief William Seelig said that the department was told that a cable had snapped.

“On behalf of the entire M.T.A., we pray for the recovery of the workers injured as a result of this tragic accident tonight,” the Metropolitan Transportation Authority said in a statement. “We will work together with all proper authorities to conduct a thorough investigation on the circumstances behind this unfortunate incident.”

Posted by Unknown at 3:22 PM No comments: 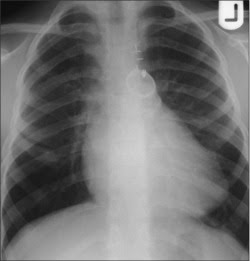 The recall was initiated following reports that the valves may cause paravalvular leaking leading to blood clots, thrombosis, or stroke. A paravalvular leak is a flow of blood around the artificial valve usually between the valve sewing ring and the heart tissue to which the valve is attached. A clinical trial conducted by St. Jude revealed an unacceptable level of product re-operation to remove and repair Silzone® valves due to paravalvular leakage.

Although St. Jude indicated that while it will no longer distribute products with Silzone® coating, it was not recommending removal of these products unless patient monitoring detected complications. People who have received Silzone implants should see a doctor immediately.
Posted by Unknown at 11:17 AM No comments: