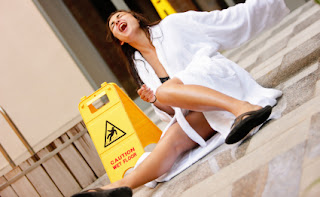 Slip and fall cases are sometimes ridiculed as the most ridiculous and illegitimate of all the cases brought in a legal system that is supposedly overflowing with cases that lack merit. It is somehow believed by some cynics that everyone who falls is always responsible for their own "slip and fall" and that it is somehow inherently wrong to bring a lawsuit for an accident which "must have been caused by one's own clumsiness." This prejudice pervades a large part of our culture where people are always expected to look where they are going. It is not, however, always that simple.

Only the most ignorant and closed minded people can fail to visualize at least some cases where the slip and fall and resulting injury to the victim is caused by the negligence of another - in these cases its the one who controls or maintains the property. In addition, many slip and fall injuries occur to the elderly or to those otherwise incapacitated by some type of physical or mental handicap that prevents them from being so agile as to always land on their feet like a cat when tripping, slipping, or stumbling on some hazard.

The law is clear. A person lawfully present on the land is entitled to a safe walking passageway, free of defects, debris or other tripping or slipping hazards. These cases are straightforward, but are not always easy to prove. For example, take the classic example of a banana peel. While a banana peel on the floor is potentially dangerous o pedestrians, it does not automatically give rise to liability on the property owner or controller and is not automatically a valid claim. The issue is one of negligence - Was the controller of the property negligent in allowing that condition to exist or did he create the condition himself? Where did the condition come from and how long was it there before the victim fell because of it? These cases often turn on such issues.

For a property owner to be liable for such a fall, he/she must (1) have notice of the defect, (2) have a reasonable opportunity to correct the defect, and (3) he/she failed to have done so, thereby causing the victim's fall. It is difficult to prove that a landowner had actual knowledge of a defective condition. The usual exception to this is if the defect was caused by the landowner himself, or by someone that works for him. If, for example, the defect is a poorly constructed sidewalk with a large raised edge or a gap, then such notice is sufficiently proven since the property owner or the controller of that property had to have known of the problem - they created it!

In debris cases (garbage, our banana peel example, other "temporary hazards") the way to prove that the landowner had notice is not that he/she had actual knowledge, but rather the law permits negligence to be proven based on "constructive" notice. Constructive notice exists and can be proven if it can be shown that the defective condition existed in an obvious place for such a period of time that the controller of the property simply MUST have noticed it (or should have noticed it!) if they would have exercised reasonable care. In other words, the slip/trip and fall case can be won by simply proving the defect and the length of time it existed in a sufficiently noticeable location. If a jar of olive oil is spilled onto a supermarket floor and it can be shown (through witnesses, surveillance tapes) that it existed on the floor and was not cleaned up for a sufficient amount of time, long enough to create a hazard and cause the victim to be injured, then the fall victim will win the case. How long does it take to get a "clean up in aisle 7?"

Another type of slip/trip and fall case is based on a recurring condition which will automatically establish notice each time it occurs. A typical example of this would be a leaky roof resulting in a wet floor each time it rains. Since the condition is recurring (the puddle will inevitably form each time it rains) the property owner/controller is "on notice" that the floor will become wet and create the usual slippery puddle. The victim does not need to prove that the owner/controller saw or should have seen the actual puddle or wet area on which the victim fell. It is enough to establish that the owner/controller knew that the roof regularly leaked in that location.

Lawyers must be creative in overcoming these obstacles. Lawyers in slip/trip and fall cases must also overcome the prejudice of the public that tends to automatically blame the victim, and chalk it up to another "klutz" being responsible for their own actions. In reality, many times a person is seriously injured a slip/trip and fall. Falls, especially in older persons, can result in nasty injuries such as fractures, hip replacements, and serious head injuries. We have even seen slip/trip and fall cases where the victim died as a result of his injuries.

Thanks for the posting, I am involved in a slip/fall my attorney is mem.Tn. I am schd for trial on monday I have not been preped for train my lawyer want even talk to me I call asked what to expect I never been in trail before the paralegal said I have not either I will ask the att. I fell I am up a creek with out a paddle tma342005b@yahoo.com plz advise.

Older people and children tend to fall down more than healthy adults, is it harder for them to recover for a slip and fall injury?

if you suffered an injury from slips and trips, it is important to determine the extent of any physical harm gained in the accident and if it's worst, seek emergency medical treatment immediately. then seek an advice from a personal injury experts on how you can claim for a compensation.

Unknown said...
This comment has been removed by a blog administrator.
9:43 AM

If it's not your fault, you deserved a slip compensation. It's your right.

If you suffered a severe injury after a slips and falls accident at work, you are entitled to claim for compensation against your employer, ask a legal advice from a work injury lawyers on what should be the best thing to do.

Thank you for sharing this post. Slip and fall injuries can be very serious and devastating. My cousin was involved in one a few years back. She was given a structured settlement for the injuries she had. A few months later the bills were coming in faster than the money was. She decided to take out some structured settlement loans, which really saved her financially.